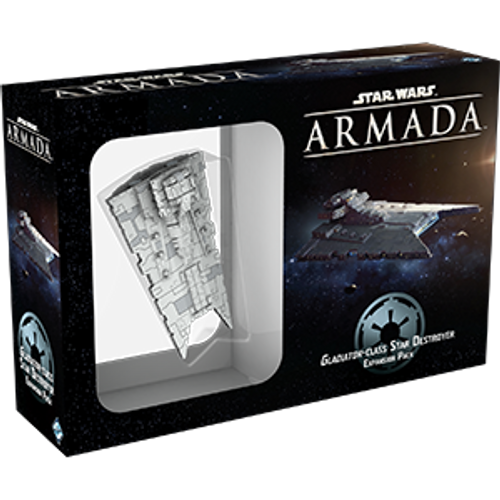 Originally designed as an escort for larger Star Destroyers, the smaller Gladiator-class Star Destroyer measures roughly five-hundred meters and proved most effective as a long-range patrol ship deployed to the fringes of the galaxy. There, its brutal armament of turbolasers, concussion missiles, laser cannons, and TIE squadrons allowed it to quickly subjugate any local opposition to the Galactic Empire.

The Gladiator-class Star Destroyer Expansion Pack for Star Wars: Armada introduces one detailed and pre-painted miniature that the expansion’s two ship cards allow you to add to your fleet as either a Gladiator I or Gladiator II. You’ll also find all the command dials and tokens that you need to bring your Star Destroyer to battle, along with ten upgrade cards that can enhance its attacks, allow it to move between attacks, and improve its accuracy.

This is not a complete game experience. A copy of the Star Wars: Armada Core Set is required to play.