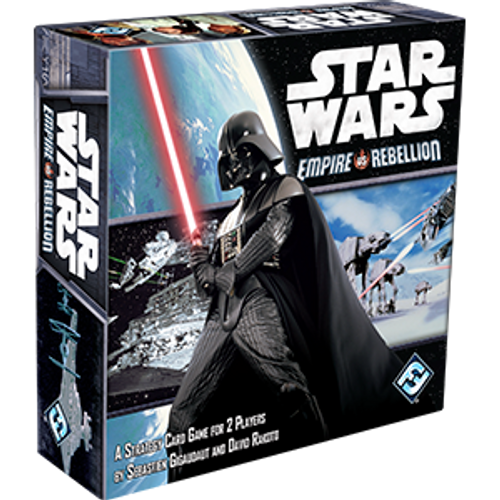 Take command of the unlimited resources of the Galactic Empire or the heroic men and women of the Rebel Alliance in Star Wars™: Empire vs. Rebellion, a card game for two players. In every round, you and your opponent match wits and resources in a struggle during a key event from the Galactic Civil War. You’ll need to stretch your resources to the limit to outmaneuver your opponent and end up on top of the struggle.

As you employ your resources, iconic characters from the Star Wars saga can have powerful effects on the outcome of a struggle. Whether you leap to the rescue with Luke Skywalker, or scheme in the shadows with Jabba the Hutt, these characters shape every struggle they enter. At the same time, overarching strategies give you a way to surprise your opponent. Secretly chosen at the beginning of each round, strategy cards can help you claim victory from the most unlikely scenarios. By winning enough struggles for the Empire or the Rebellion, you are victorious.