1754 Conquest: The French and Indian War 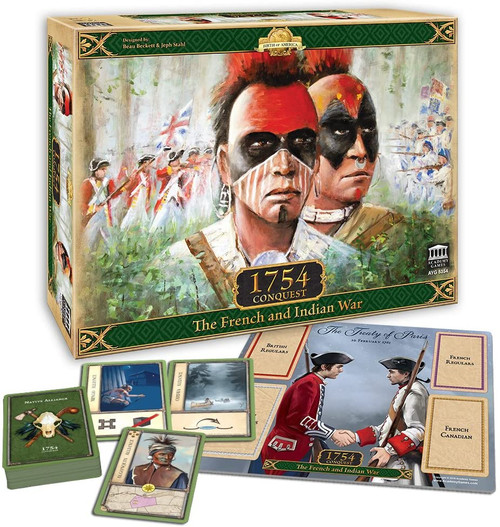 1754 Conquest: The French and Indian War

The year is 1754 and France and Britain have thriving colonies in North America. New England Colonies have begun to expand west into the Ohio River Valley. In response, France has built a chain of forts to protect their American territorial claims, extending from Lake Erie to the Gulf of Mexico! Virginia’s Governor sends a young George Washington with a small force to ‘convince’ the French to leave the region. A deadly confrontation with the French and their Native American allies deep in the Appalachian wilderness sparks the beginning of a world war that engulfs the Americas, Europe, and India. 1754 - Conquest is an area control game that continues the award winning Birth of America Series. In 1754 - Conquest, each player controls a French or British Faction and competes for dominance over the Americas. The French players command the French Canadiens and the French Regulars. The British players command the British Colonials and the British Regulars. Both sides attempt to ally themselves with the powerful Native American Nations. Players for each side plan and work together in order to control important town and fort Victory Areas on the map. Bundle includes 'Treaty of Paris' board, and 'Native Alliance Expansion'!